Having an Extraordinary Impact in Asia – Royal Life Saving

I recently had the good fortune to meet with Justin Scarr, Chief Operating Officer of Royal Life Saving Society – Australia and learn about the extraordinary efforts of the organisation in Asia and the significant impact on the lives of thousands of families.  In Asia, almost 1000 children die each day from drowning – there is one death every 45 seconds, a rate 40 or 50 times higher than in Australia.  As Australians, our assumption is that people drown taking unnecessary risks, swimming in places that they shouldn’t, not paying attention to warnings; lifeguards, whistles, signage and other enforcements placed to protect. Sadly, in Asia, the reality is very different. Drowning in Asia, particularly of children, has little to do with pursuit of lifestyle or aquatic recreation.   In rural Asia, which carries the greatest burden, families have houses that are surrounded by open waterways; rice paddies, fish ponds for food, wells, troughs for the livestock that live in compounds, and streams that turn into torrents with the rains that come frequently.

The research published by Royal Life Saving partners The Alliance for Safe Children with support from UNICEF, is rapidly changing the way this previously hidden epidemic is perceived. It shows that in a developing country a child who drowns rarely makes it to hospital, almost never gets rescued and is mostly likely loved but farewelled long before government or the UN gets to count them, and in the world of foreign aid and public health numbers count. These uncounted children drown invisibly. 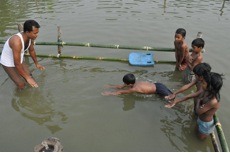 This epidemic of child drowning can be divided into two broad categories. The first and perhaps the easiest for us to understand is drowning in children over five. In most cases they lack swimming skills, the schools don’t teach swimming or water safety, and they understand little about the risks or simple prevention strategies. For many, even the walk home from school puts them at great risk of drowning as they walk on paddy dikes, around ponds and cross rivers on rickety bamboos bridges.

Royal Life Saving is making a big difference in this area. With partners in Bangladesh, Vietnam and Thailand they are trialling survival swimming lessons; delivered in rural villages where there are no pools; by local lifesavers where there are no clubs; and in a way where a small amount of money goes a very long way. SwimSafe has now reached over 65,000 children across 3 countries, and the RLS ambition is for a million more. Already the evidence of the reductions in child drowning is impressive. The younger children, those under four, are higher in numbers and more difficult to reach. In Australia, our child drowning rates are reducing, though remain a concern.  The RLS ‘Keep Watch’ program advocates supervision, barriers, water familiarisation and CPR. Not surprisingly these principles are equally valid in Asia. There is little point telling parents to watch their children when culture and circumstance has them on hips or the floor whilst mum, grandma, or sister is busy surviving, cooking, cleaning, tending to cattle, reaping rice and everything else their day entails.

Stronger infrastructure, more stable households and improved health systems; the products of economic development may eventually change some of this.  Interestingly, the RLS have found that in addition to home safety programs, community education and awareness, a strategy as simple as establishing a crèche or day care centre in the village is making a huge difference to drowning.  Something as simple as a playpen is making a difference in homes with infants and 1 year olds. Research found that young children most frequently drown between the busy hours of 9am and 1pm. So by creating a small system of child care in each village, we are not only protecting children during the high risk hours, but also give a local woman a job, a family an income, children an education and all those mothers of the ‘terrible twos’ some more time.

The impact of RLS initiatives is encouraging others, in some cases much bigger international organisations to trial similar strategies. The Australian Government, through AusAID has recognised RLS efforts, and is supporting the RLS goal to establish an international drowning research centre in Bangladesh.  The RLS has also successfully lobbied for the World Conference on Drowning Prevention – typically hosted in developed economies – to be hosted by the RLS in 2011 in Vietnam. An opportunity exists for corporate sponsorship of this conference.  It is a great cause, and also a good opportunity to profile your organization in Asia.